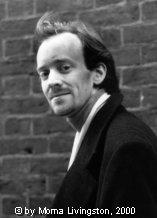 Recently, Entrée to Black Paris had the pleasure of meeting Guy Livingston, an American concert pianist living in Paris. He was gracious enough to take time out of a busy rehearsal schedule to talk with us about his work as a performer and his passion for the music of George Antheil.

DP!: In what city were you raised?

GL: Knoxville, Tennessee. I moved away to go to college and haven't been back since.

DP!: What were the early influences that led you to study the piano?

GL: My grandmother told me that I had to study piano. It was that simple! She paid for the lessons. I started when I was 8 years old. Hated it for the first year! My parents bought a Steinway grand "for a deal" from an old church. They had it refurbished when they got the money. Lots of their friends were musicians and they would come by the house to play.

I come from a family of artists: my father is a sculptor and my mother is a photographer. My parents created costume and set designs at the theater. Sometimes they had to work late, so my brother and I came to the theater to be with them while they worked. My brother is now a cello player and creates "architectural sound installations" in California.

On the classical music concert stage there is a "divide" between the performers of the music and the public. In my performances, I try to do everything possible to close that divide.

DP!: We note on the Internet that the Royal Conservatory offers a curriculum in jazz. Would you comment on the interest that Europeans have for this music?

GL: I have a lot of friends who are jazz musicians in the States and who come over here to perform. They get paid better here, they get a bigger audience and they get reviewed. If they are doing a CD release they try to plan it so that they can have it released in Europe. My American friends love coming on a European tour. Contemporary classical music is also better accepted here.

GL: The other great teacher in my life after Edelman. I studied with him during my first three years in Paris, one hour a week. He recently died at the age of 82. He began as a performer, doing avant-garde music. A great teacher!

DP!: What led you to remain in Paris?

GL: I love the city. It�s so beautiful! Even on a cold, rainy day like today, there is such a richness, visually. Of course, the food is fantastic! It's not a cheap city and it's not always easy to live in and to do business in, but Paris is such a rich place for inspiration. For me it is irreplaceable that way. No other city comes close. Even as a kid, I imagined living in Paris and the city has lived up to my expectations.

Musically, Paris is a good city. There are so many concerts here! There is a wealth of stuff to go to...movies, films... I've always said that I don't need a TV in Paris. It's still an artistic Mecca. The city has provided all of the stimulation that I could possibly wish for.

I get an adrenalin kick every time I get off the train at the Gare du Nord and come back to the city. It feels good!

DP!: What is your favorite arrondissement in Paris?

GL: One of my favorite areas is the open air market on rue Daguerre. It has a southern, Mediterranean city feel. The area where rue Daguerre is located has more green space and seems more affordable [than other areas in Paris].

DP!: You give piano concerts, publish a review called Paris Transatlantic and give historical presentations of George Antheil. Could you give us some information about your recent and upcoming piano concerts?

GL: I played Antheil's Ballet Mécanique recently with the Orchestre Nationale de France, and I am now working on a new project, which is a DVD to be released in the fall. There will be 60 piano pieces, of one minute each, on the DVD. And this Spring I'm touring in South Africa and Germany.

DP!: How often are you called upon to give lectures on music?

GL: About 6 to 7 times a year [at various universities].

DP!: What is the subject matter?

GL: I give lectures on the music of George Antheil, American music, European music, and on what it means to be a performer.

DP!: Please comment on your work as editor of Paris Transatlantic review.

GL: I was in charge for 10 years and just retired. Dan Warburton is my successor. I loved editing and publishing. The magazine was a print publication, then went to the Internet. It has never accepted advertising.

DP!: Tell us about your historical presentation of George Antheil.

GL: It is a theatrical show with costume and decor. I wrote the script and based it as much as possible on Antheil's own words in letters, interviews and other documents. The next performances are in California in 2006.

DP!: We have read that you first heard a performance of Antheil's Ballet Mécanique in Amsterdam. In what year was that?

DP!: What were your reactions to this music?

GL: My reactions were: This is incredible! Where can I find out about this guy? How come I never heard of him? How could anyone have written such vile, exciting, clashing, brilliant music? Is there anything else?In five years I tracked town 13 piano sonatas by him.

GL: He gave himself the title. He was a great self-promoter.

DP!: Did Antheil really have "Paris by the ear"?

GL: Yes! For a couple of years.

DP!: In an interview with National Public Radio, you said that the influence of African drums can be heard in Antheil's music. Where do you suppose that he heard African drumming?

GL: In Tunisia, in the Sahara Desert. He claims to have heard "real African music" there. His use of rhythm [in his compositions] changes drastically after that experience.

Antheil was one of the first [composers] to be interested in African-American music. He had a teacher who was Creole. This was extraordinary, to be growing up in Trenton in a German-Italian neighborhood, to have a Creole woman who was his teacher. And he learned all these tunes she taught. Blackness at this time would have been almost forbidden for a young white kid from a German family. He knew all African-American folk tunes. I think that�s why he wrote such great jazz: he wrote Jazz Symphony, Archipelago, Creole Symphony... Antheil acknowledged the great debt he owed her.

DP!: Why was his concert at Carnegie Hall a disaster?

GL: Antheil hired Donald Friede to do the publicity for the concert. Friede marketed the concert like you'd market a rock show. It didn't work. The audience thought it was being made fun of and took the show as a joke. The whole event was mismanaged from top to bottom.

DP!: Did this mark the end of Antheil's career as a rebel?

GL: Yes. He was psychologically devastated by the experience.

DP!: You were the artistic director of the George Antheil Festival, held in Trenton, New Jersey in March 2003. Would you comment on the festival and the interest of the people who attended?

GL: It was a great festival! People said that they liked it. Most Trentonians had never heard of Antheil, even though he was from Trenton. [At the festival] there were 17 lectures, 5 concerts and a techno dance party. Restaurants got involved. A beautiful documentary was filmed. To be released!

DP!: Will there be another Antheil festival?

GL: Probably in Amsterdam. No date has been set.

DP!: Why isn't Antheil well known for having been a composer of music for Hollywood films?

GL: He did only B movies.

DP!: Is there a name for the kind of music that he composed for Marni Nixon for the film Dementia?

GL: Kitsch! Antheil was good at it.

DP!: Does Antheil stand as one of the 20th century's great composers?

GL: No. However, he wrote some of the greatest piano music of the 20th century. And Ballet Mécanique is in the top 10 compositions of all time. A really great piece!