A pilgrimage is a visit to a place that is considered special, where you go to show your respect. The term is most frequently used to describe a voyage to a sacred place.

The Merriam-Webster dictionary also defines “pilgrimage” as “the course of life on earth.”

Entrée to Black Paris (ETBP) is pleased to announce the launch of the Black Paris Pilgrimage - a private, guided walking tour that addresses "pilgrimage" in both contexts described above.

Père-Lachaise Cemetery, aka the Cemetery of the East, is the most famous necropolis of France and the most visited cemetery in the world (more than 3.5 million visitors go there every year). We created a tour of this "garden cemetery" to celebrate the lives of numerous black people who called Paris home as well as to pay homage to them.

Black people are physically in the soil at Père-Lachaise.  Since the cemetery established the Jardin de Souvenir (Garden of Remembrance) in 1985, the ashes of those whose bodies were cremated have been scattered here.  Among them are William Gardner Smith, an African-American novelist, essayist, and journalist who was a contemporary of Richard Wright and James Baldwin.

Prior to being dispersed in the garden, Smith's ashes were held in a niche at the cemetery's columbarium. which was built around the crematorium in 1889 and expanded with subterranean galleries in 1930.

As is true for the cemetery's plots, niches are allotted via a "concession system of leasing"  through which a fee must be paid at predetermined intervals to retain the right to occupy them.

If the concession is not renewed, the remains are removed.  Bones are placed in a common grave and ashes are scattered in the Jardin de Souvenir.

Richard Wright's ashes also reside at Père-Lachaise.  They are kept in Niche 848 of the original columbarium. 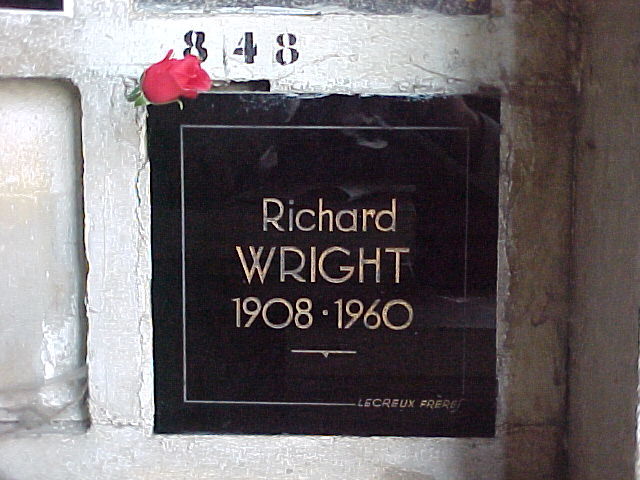 African Americans whose remains are inurned in the subterranean galleries include James Emanuel and Patricia Laplante-Collins.

Black Paris Pilgrimage begins at the upper level of the cemetery where the Jardin de Souvenir , the crematorium, and the columbarium are found.  The tour route zigs and zags across the scenic landscape, moving down hill along the way.

Architect Alexandre Brongniart preserved the groves and winding paths of the estate purchased for the cemetery when he designed it in the early 19th century.  His intent was to immerse visitors in nature to inspire "a suitably meditative state in which to contemplate imposing monuments to the moral examples of great citizens."

Indeed, there is no end to the remarkable funerary architecture and memorials that are visible along the tour route.

Those wishing to experience the Black Paris Pilgrimage must be physically fit.  The cobblestone avenues that wind through the cemetery are rough and uneven, and on a few occasions, visitors must leave the path to walk through cemetery divisions replete with exposed tree roots and decaying stones to see the graves on the tour.

Fashion designer Patrick Kelly's grave is one such example of this.

Black Paris Pilgrimage is the first and only afrocentric walking tour of Père-Lachaise Cemetery.  It can be booked for individuals and private groups only.