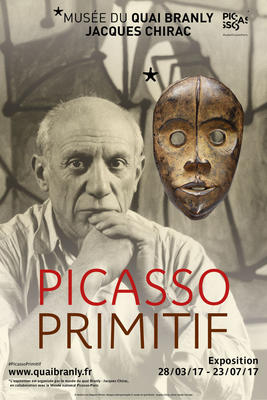 Organized by the Musée du quai Branly - Jacques Chirac in collaboration with the Musée National Picasso-Paris, Picasso Primitif endeavors to examine the relationship between "primitive" art and the art of Pablo Picasso. The exhibition consists of more than 100 works by Picasso, as well as numerous documents (letters, post cards, photographs...) that reveal details of his life and the times in which he lived.

Exhibition curator Yves Le Fur led a group of bloggers through the Garden Gallery at the museum last Thursday evening, presenting numerous works and explaining his concept for the show. 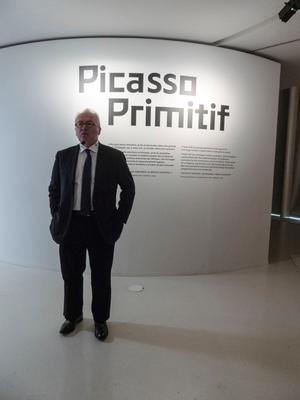 The first part of the exhibition consists of a chronology of Picasso's life in Paris and introduces visitors to his first encounters with non-Western art. The timeline begins in 1900, when he moved to Paris, and ends in 1974, one year after his death.

Throughout this section, documentation clearly indicates that Picasso was an avid collector of African and Oceanic art. According to the information posted, he purchased his first works in 1907, shortly after having completed Les Demoiselles d'Avignon. He frequently loaned pieces from his collection to prestigious art shows. More than 200 previously unknown works were found in his Cannes studio after his death. 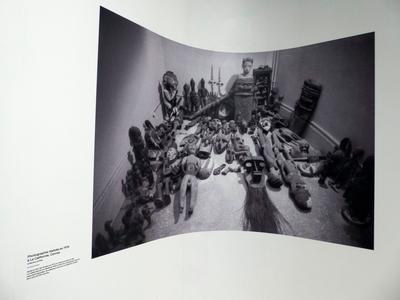 The subject of Picasso's infamous quote "L'Art Nègre? Connais pas !" (Negro Art? I don't know it!) is addressed in this section of the exhibition. Le Fur opined that the statement, which was made in 1920, has been taken out of context and indicated his belief that Picasso was comparing his level of knowledge of this art form to that of experts such as Guillaume Apollinaire.

Another explanation for the statement is found in an information panel for the year 1923, where Picasso indicates that his interviewer attributed those words to him without Picasso actually having stated them: 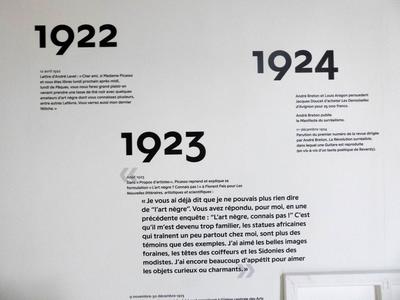 "I already told you that I didn't have anything else to say about 'Negro art.' You responded for me, 'Negro art? I don't know it!'"

Yet the artist clearly expressed his debt to African art when he made the following statement after visiting the Trocadéro Ethnological Museum in 1907:

At that time, for most people, an African mask was only an ethnographic object. When I went to the Trocadéro Museum with Derain for the first time, the smell of mold and abandon caught in my throat. I was so depressed that I wanted to leave right away. But I forced myself to stay, to examine the masks, all the objects that men executed for a sacred purpose, magic, to serve as an intermediary between them and the unknown, hostile forces that surrounded them, trying to overcome their fear by giving it color and form.

And then I understood that this is the very meaning of painting. This is not an esthetic process; it is a form of magic that is interposed between the hostile universe and us, a way to seize power by imposing form on our terrors as well as our desires. The day that I understood that, I knew that I had found my path.

Picasso revisited his painting Les Demoiselles d'Avignon because of what he experienced at the museum. He was quoted by Cultural Affairs Minister André Malraux as calling the painting his first "exorcism canvas".

The second part of the exhibition is called "Corps à Corps" ("Face to Face"). It looks at various themes found in non-Western art that are echoed in Picasso's art - the use of simplified forms as a means of representing the essence of the human body (Archetypes), the combination of human and animal forms (Metamorphoses), and the deconstruction of the body to reveal the inner character housed within (The Id). The non-Western works shown in this section are displayed in proximity to Picasso's works to illustrate similarities of inspiration and form, but not necessarily to indicate that they directly inspired the Picasso works located nearby. 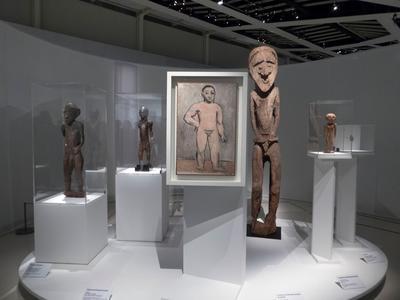 Some non-Western works that were acquired by Picasso are also on display. 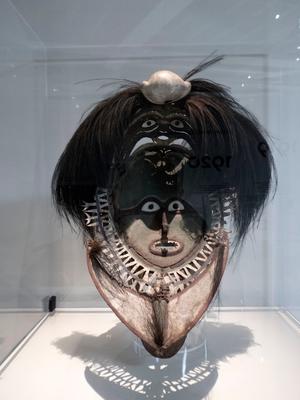