I recently took clients on the Entrée to Black Paris "Spirit of Africa" walk, which is one of our "off-the-beaten-track" tours.  This walk focuses on a large part of La Goutte d'Or, served by the metro stations Château Rouge (Line 4) and Barbès Rochechouart (Lines 2 and 4).

Urban renewal continues in the area.  The Château Rouge metro station underwent a major overhaul between 2015 and 2017 and its entry hall is now three times larger than before. One of the walls is graced with a beautiful fresco by Cameroonian artist Barthélémy Toguo, who is a former inhabitant of the quarter.  The mural is composed of 200 glazed stoneware tiles created at the Manufacture de Sèvres, the famed French ceramics factory.

The work is called Celebrations.  Measuring 10 x 3 meters (32.8 x 9.84 feet), it is painted in a shade of blue that was discovered at the manufacture and named "Toguo blue" after the artist.

I first wrote about La Goutte d'Or's urban renewal in a blog post in 2011:

The temporary gardens that sprang up in spaces where buildings had been demolished are mostly replaced by new structures now.

One glaring exception to this is the lot that was once occupied by the Mosquée Al Fath at 6, rue des Poissoniers.  Though the city pledged to build one part of the Institut des Cultures d'Islam on the site by 2015, this has not come to pass.  The sign has been removed and there is no evidence that any construction is pending.

A building at 19, rue Léon continues to house what was intended to be a temporary location for the center.

A canteen that serves 100% organic food, including several offerings for vegans, has been established at the corner of rue des Poissoniers and rue Myrha.  It is called Le Myrha.

The Ayyem Zamen Café Social Dejean at the corner of rue Dejean and rue des Poissoniers serves immigrants aged 60 and older who are in economic distress and in need of lodging.  It has been open since 2008.

The Marché Dejean and numerous stores on neighboring streets that sell produce, fish, meats, and packaged goods continue to thrive. 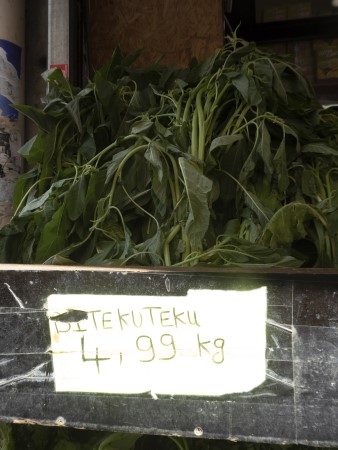 I saw an interesting book in the window of Les Xérographes, an association that produces books about the quarter.  Barbès L'Africaine highlights the contributions that African immigrants made to the quarter between 1970 and 1990, particularly those pertaining to music, cinema, fashion, cuisine, and spirituality.

Signs on rue Léon indicate that a political party called the NPA (Nouveau Parti Anticapitaliste, or New Anticapitalist Party) and the residents of the 18th arrondissement welcome and support immigrants.

Our walk ended at the Brasserie Barbès, which occupies the corner across the street from the famous discount department store, Tati.  In business since May 2015, the restaurant/bar is the most obvious example of the architectural and commercial changes that are ongoing in La Goutte d'Or.