As reported in our blog post dated 1 March 2018, Fulbright scholar and Entrée to Black Paris intern Sonita Moss is conducting follow-up interviews with several of the women featured in our 2012 Black Paris Profiles™ publication. These interviews will serve as part of Sonita's research project as well as provide material for ETBP blog posts during Women’s History Month.

Cheryl Pegues could be considered a renaissance woman. She refers to herself as a realist, instead. A native of Seattle Washington, Cheryl has lived in Paris since 1981 and worked in an array of fascinating jobs ranging from fashion designer to chef. Standing at under 5 foot 2 with a formidable presence and a regal confidence, it is not hard to believe that Ms. Pegues is a woman who sets her sights high and reaches for the stars.

Her realism is apparent when sharing her advice about Americans who want to follow in her footsteps and move to Paris. Rather than romanticizing the life she’s created for herself Paris, Cheryl warns Americans about coming to Paris with stars in their eyes. Ms. Pegues says that it’s difficult to start a business in Paris, and almost impossible to understand the culture unless you speak the language:

I think a lot of people come here searching for something they believe is here…it’s a good country if you’re rich or have a wealthy background. There’s a system to nurse you along, but for someone to voluntarily come here … This isn’t a good place for production. The real estate is too expensive, the workforce is too expensive. In many ways, it’s not a friendly place for business. The infrastructure isn’t good.

Instead, Cheryl suggests that prospective Parisians coming for an adventure should consider something increasingly popular, in the same vein as the boom weekend rental industry:

People persist in the idea because it’s romantic – but you needn’t move here, just come for vacation, rent a house and make your stuff and go home. It’s like in a scary movie – don’t go to the dark part of the house with a flashlight. Further, speaking the language is fundamental: “Do you speak French? Are you interested in the culture? People come here and they have no interest in the French. They don’t want to follow the rules. Do you know the culture, do you speak the language? Most of the time they’re not, they don’t. When I first came here I spoke to French people and I found things out. It’s a country of hidden information.

I ask Ms. Pegues what advice she has for young women who want to be courageous, bold, and live life on their own terms. She tells me a story that shaped her as a young person:

I had the opportunity to do a class called Women in Business, back in ’76. Back then when there weren’t women in business, there were 14 of us in the class. We had to introduce ourselves and say what we were most afraid of on the first day. I was afraid of falling into deep water in the dark. She said that we all had to do something to challenge that fear.

I felt nauseous and I waited until two weeks before the end of the class, I was too afraid. I was with some friends in Yakima, and they were gonna go inner tubing. I was terrified but I said okay, that sounds all right. It was 4 feet deep, and my friends said that they were going to protect me.

They kicked me into the middle of the river in my inner tube – I was too small and I got caught into the rapids and finally got out. And I had actually faced a fear.

I’m terrified all the time, and sometimes people help me – but you show up. The most brave thing you can do is show up, be present, speak your peace, and don’t attach to the outcome. Once you realize the nature of things, you are okay. It’s okay to be scared, but you’re okay.

I was always a tomboy and I watched boys – they took risks.

On the second day of the interview, Ms. Pegues is selling some of her hand-crafted items at a pop-up shop at Lieu 37, a pop-up shop in Paris' 10th arrondissement.

This is one of a few ways that Ms. Pegues remains self-employed. Her fashions are beautiful and impeccably made. She began with fashion accessories about 20 years ago, and became a pattern maker, modeliste, also teaching at a fashion school for 10 years. She likes to play with prints, partially African prints with some Asian inspired fabrics from her mostly-Asian neighborhood in Seattle. 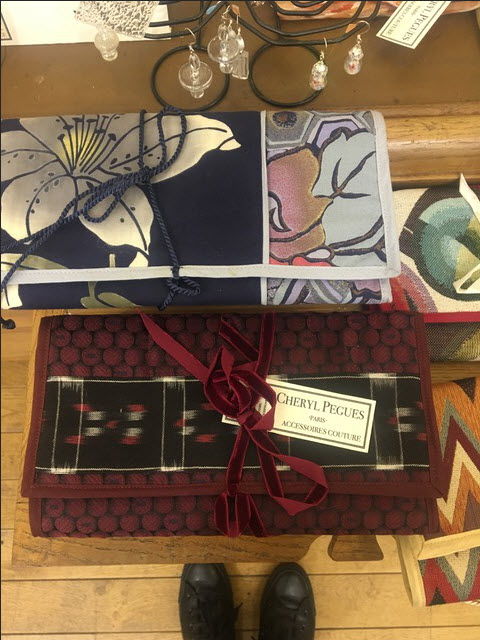 In addition to scarves, she makes earrings with vintage beads and jewelry that she purchases at estate sales.

Each design is unique, and requires a certain discipline since she tries to use 5 beads or less.

“My jewelry isn’t as popular with French women, but it’s all right, everyone has their customer base. Certain French women and African-American women buy everything eventually,” she says.

Her perseverance and acute sense of confidence convinces me that she will indeed sell everything, eventually. 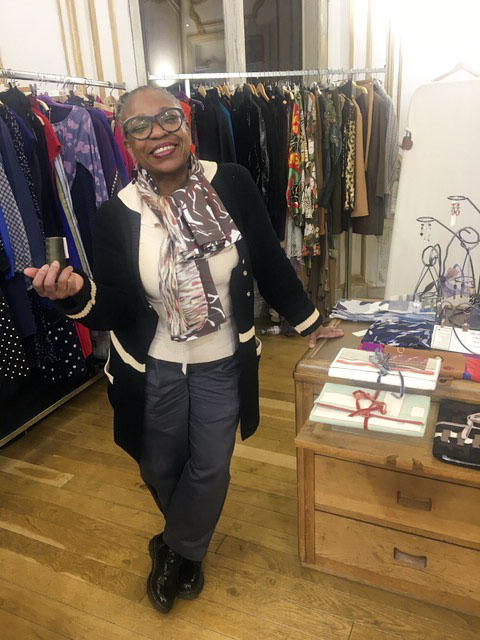