On February 23, 2017, the Académie de l'Art Culinaire du Monde Créole hosted its first event for a group of U.S. travelers to Paris!

As the Académie's Ambassador to the U.S., I was pleased to propose a culinary workshop to Jacqueline Cofield, founder of J Rêve International, for J Rêve's second Paris Global Arts and Culture Exchange Program for educators. This professional development excursion took place from February 19-25, 2017 and Cofield was excited to include culinary arts as part of the activities for attendees.

Isabelle Tulle, the Académie's communications consultant, arranged for the workshop to be held at La Canne à Sucre - an Antillean and Reunion Island restaurant of long standing in Paris' 18th arrondissement. 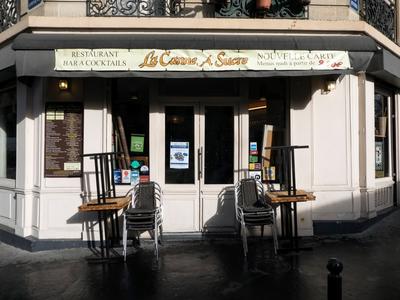 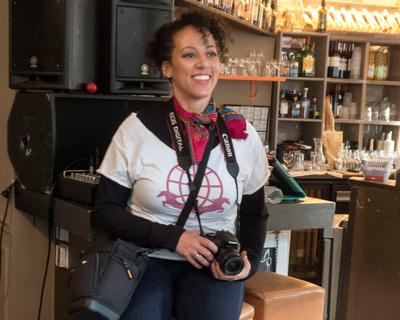 Chef Stéphane Sorbon, winner of the Académie's 2016 Trophée Entrepreneurs (Entrepreneur Trophy) for traditional Créole cuisine, was the creative force behind the event. When we arrived, he was busily setting up the preparation stations for the afternoon. 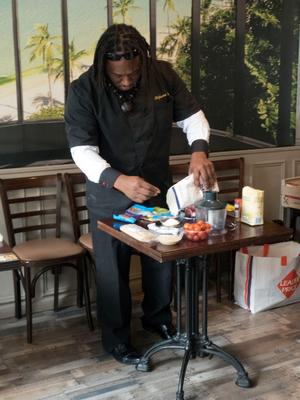 On the menu were the following Caribbean classics: 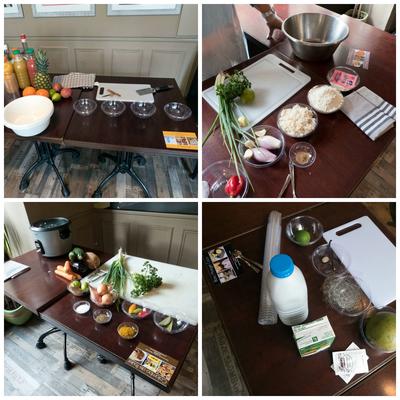 The eight participants formed four teams of two persons. Each team was responsible for preparing one part of the meal.

To make things even more interesting, each team was asked to evaluate the appearance, presentation of the preparation, and taste of the dishes prepared by the other teams. The team with the highest score won a prize.

Chef Sorbon instructed each team in turn. Because he does not speak English, I served as translator.

We began with the Blanc Manger Coco because it had to cool and set in time for dinner. Team members Autumn Scroggin and Bobby Couch took turns grating, chopping, stirring, and cooking the ingredients for what turned out to be a delectable finish for the meal. 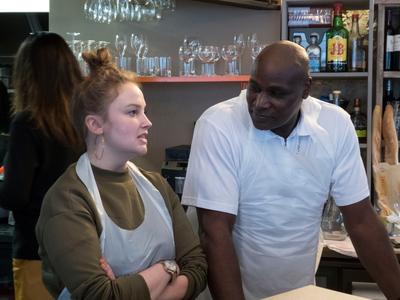 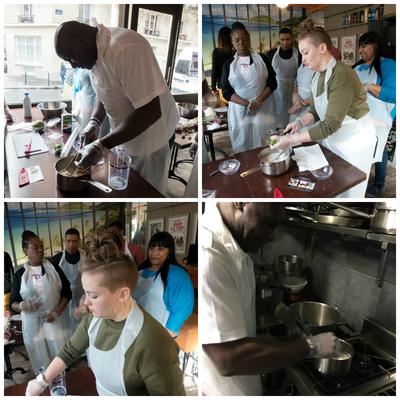 Next, we turned our attention to the Punch Planteur. Chef Sorbon told team members Maria Pascual and Jonathan McBride the order in which to add the spices, fruits, juices, cane liqueur, and rum. They carried out his instructions to the letter! 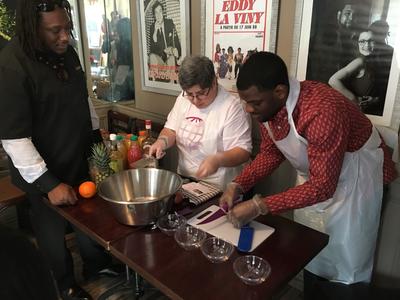 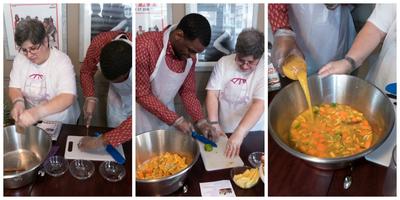 Jon then placed the punch in the refrigerator so it would be cool in time for dinner.

The Colombo de Poulet was the most complicated dish to prepare. Team members Louis King and Lancey Alexander gave it their all. 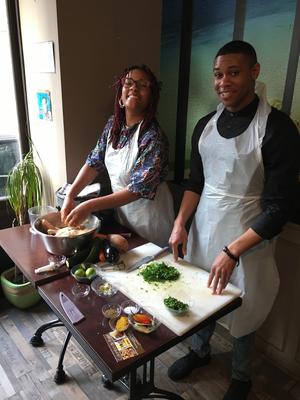 Lots of herbs, spices, and peppers go into a Colombo dish.

Louis and Lancey scored the chicken to allow the marinade to penetrate, then chopped and combined the ingredients for the marinade. Chef Sorbon browned cumin seeds and mustard seeds in the oil that would be used for cooking the chicken, then Louis did the cooking. Both team members chopped the vegetables that went into the pot once the chicken was browned. 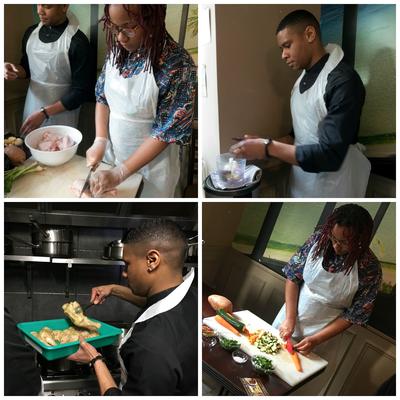 Once these were added to the pot, we gathered around the team that would prepare the starter. 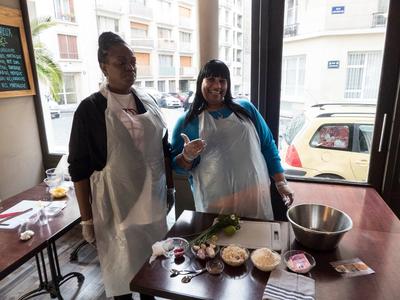 There was lots of chopping to do to prepare the cod mixture. While the peppers used for the chicken dish were mild, the variety used for the accras was spicy. Chef Sorbon warned team members Patty Frazier and Robin Lyons-Couch not to include seeds when they added the pepper.

Once the vegetables were chopped, Robin mixed them into the fish by hand. She continued mixing as Patty added the flour and baking powder. She then took the preparation into the kitchen, where she deep fried it by the spoonful. 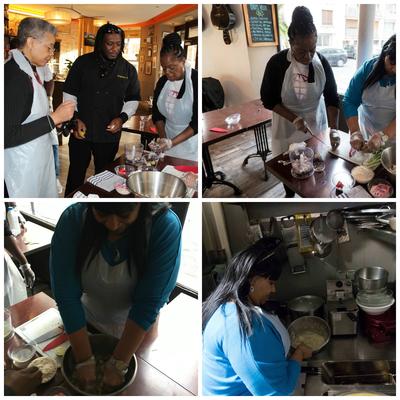 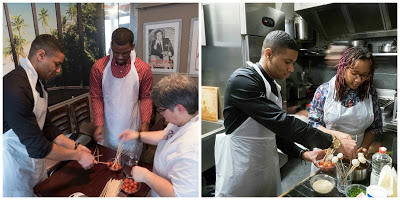 Finally, everything was ready and we prepared to sit down and enjoy the meal. 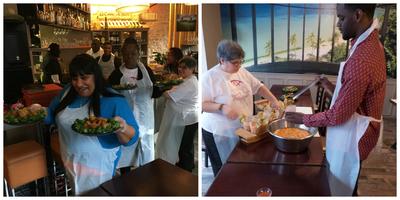 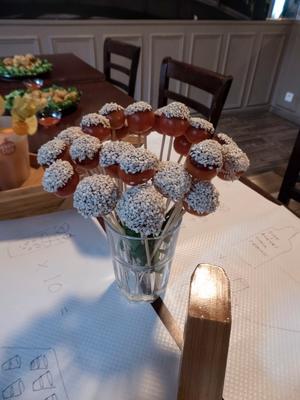 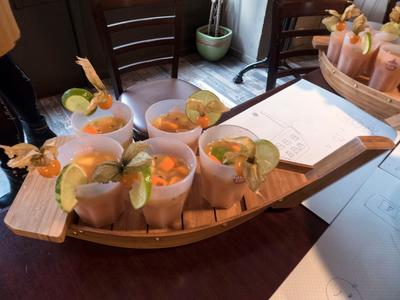 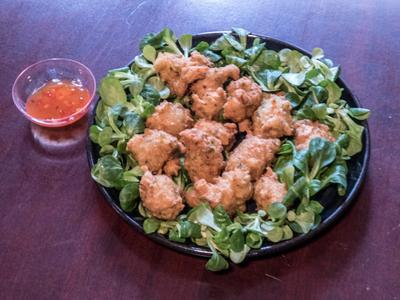 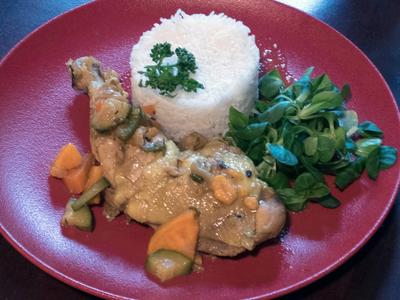 The blanc manger coco, which had been prepared with and without a pineapple topping, was retrieved from the kitchen at the last possible moment. 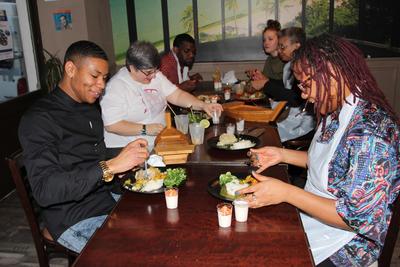 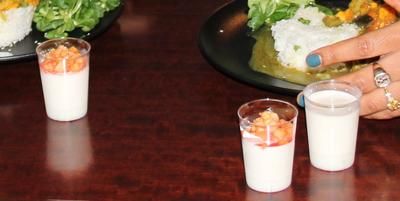 Patty repeatedly declared that the meal was the best she had eaten during the entire time she'd been in Paris!

The evaluations were quickly tallied at the end of the workshop and we waited to hear who would emerge victorious from the afternoon's activities. The winner was Team Accras de Morue.

The prize was a gift bag of Chef Sorbon's homemade banana marmalade, Colombo spices, bitter almond extract, and vanilla extract. Chef proudly informed us that these products will be available for purchase on line in the near future. 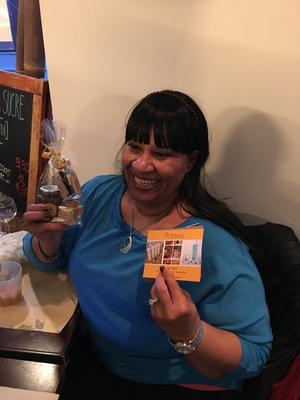 Robin and her prize
© Entrée to Black Paris

The sun was setting as we left the restaurant. Everyone agreed that the afternoon had been magical! 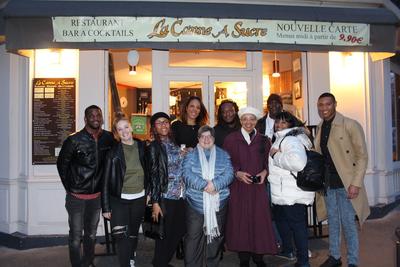 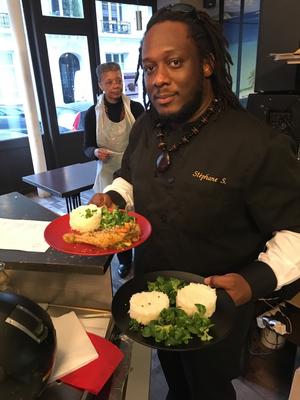 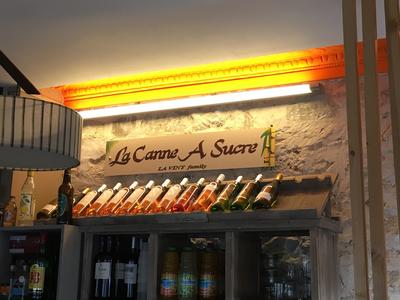